ATLANTA – Representatives from the City of Atlanta, the Georgia Municipal Association (GMA) and the National League of Cities (NLC) are calling on the federal government to partner with cities on infrastructure while showcasing local efforts to transform the Atlanta Bellwood Quarry.

The National League of Cities released Wednesday its annual State of the Cities report, which analyzes mayoral speeches and highlights issues and trends that are most critical to cities. Fifty-six percent of mayors nationwide indicated that infrastructure was among their top issues. Within the broader topic of infrastructure, water and waste management were mentioned as key issues of concern. 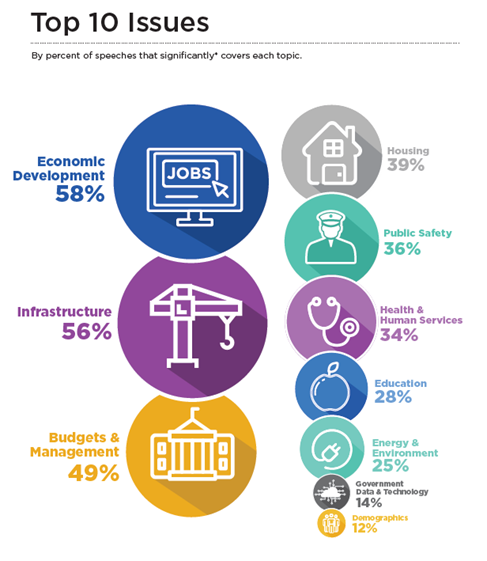 Currently, the City of Atlanta is undertaking a multi-year, multimillion-dollar effort to transform the abandoned Bellwood granite quarry into a reservoir. This effort will expand the city’s water supply, create the city’s largest public park and provide a significant upgrade to aging infrastructure.

“The water supply project, under the leadership of Commissioner Kishia Powell, has the City of Atlanta thinking about not just today, but what our efforts are around sustainability in the future,” said Atlanta Mayor Keisha Lance Bottoms. “Such a significant part of that is what we see happening at Bellwood Quarry.”

Atlanta is just one example of how cities across the country are investing in infrastructure to plan for the future.

Wednesday’s press conference marked the beginning of the annual Women in Municipal Government (WIMG) summer conference. This week, WIMG, a caucus within the National League of Cities, brings together more than 70 women in local government from across the country to network, learn from each other and learn how the City of Atlanta is leading the way on issues like infrastructure and economic development.

“I’m serving as president of the Women in Municipal Government [caucus] this year, and I’m pleased to welcome women local elected officials from across the country to Atlanta as we kick off our summer conference this week,” said District 12 Atlanta City Councilmember Joyce M. Sheperd. “We will be showcasing all that our city has to offer and how we are investing in our water infrastructure, as well as in affordable housing and economic development.”

Mayor Bottoms, who greeted WIMG members at Atlanta City Hall, said, “So much of it is not about having to reinvent the wheel, but for us to learn from each other. I encourage members of this conference to leave some of their ideas and best practices behind so that we can learn and grow together.”

The WIMG Summer Conference concludes at the Omni Atlanta Hotel on June 2.

About the Georgia Municipal Association

Based in Atlanta, the Georgia Municipal Association (GMA) is a voluntary nonprofit organization that provides legislative advocacy and educational, employee-benefit and technical consulting services to its members. GMA's membership currently totals 521 municipal governments, accounting for more than 99% of the state's municipal population. Website: www.gmanet.com

About the National League of Cities

The National League of Cities (NLC) is dedicated to helping city leaders build better communities. NLC is a resource and advocate for 19,000 cities, towns and villages, representing more than 218 million Americans. Website: www.nlc.org